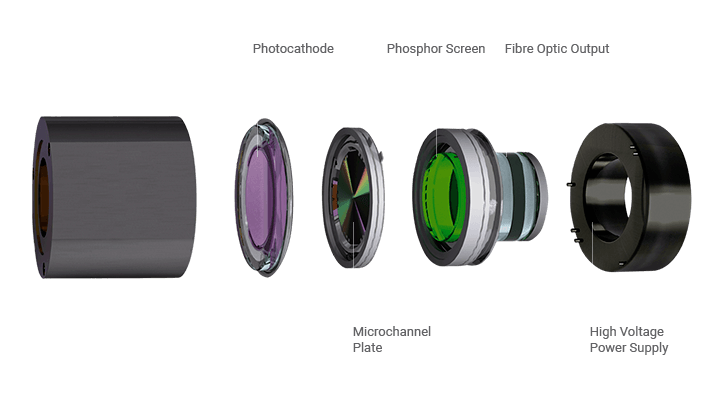 How to buy a nightvision equiptment

Advices to the buyer

The task of choosing a high quality night vision unit that satisfies your requirements and budget is never easy. Stores and catalogues offer several types of night vision units made by different manufacturers. Simple reading of the registration certificates may not give sufficient understanding of the available selection because sometimes manufactures exaggerate real specifications of the equipment (sometimes in 5–100 times) and aggressively advertise their product without a clear explanation of all technical data to the customer.

Not claming the completeness of this article, we hope that it will help you to choose a nightvision device of the most suitable type.

Every nightvision device (NV) works on the principle of multiplying the brightness of the image in the wavelength of visible and near-visible infrared light. The unit contains an objective lens, light amplification tube with the high voltage power supply, and the eye -glass. Light (starlight for example) reflects from the object to be viewed, passes though the objective lens and creates an image on the photo cathode of the light amplification tube. Inside of the light amplification tube, the light is electronically amplified and projected as a yellowish green glow on a screen that is then seen by the viewer. The two most important characteristics for the NV are the characteristics of the NV tube and optics of the unit. Internationally accepted terminology classifies the NV tubes in I, II, or III generation (with certain intermediate levels of I+ and II+ gen.).

The Light Amplification tube for Gen. I employs a vacuum tube with the photo cathode sensitivity 120–250 mA/lm. The light amplification is 120–900, resolution in the center is 25–35 lines per millimeter.

The NV products manufactured using these tubes are popular because of their low price (under 0). One of the characteristics of these units is that the image is most clear in the middle of the screen while becoming somewhat distorted and less clear along the edges. Bright light sources (street lights, lit windows etc.) may spoil a view by exposing it to light.

Even within the limits of a single class, Gen. I NV tubes may be quite different in their performance. As a part of quality control during manufacturing the tubes are evaluated by quality and are sold for significantly different prices depending on their amplification and image sharpness. Sometimes this difference in cost is reflected on prices of the NV units from different manufacturers. «Dedal-Handy» and «Dedal- 160», for example, use tubes that are in 1,5–2 times more expensive than those found in competitive products. Tube selection is based on the sensitivity of the photo cathode, light amplification, resolution and the clearness of the field of view. Small black specks on the screen, as a rule, do not distort the viewing in the dark and would not be a reason to reject the NV. However, bright specs (star like) and light spots in the view field detect that unit is invalid.

A unit, which lacks image contrast, is of a poor quality. Buying an NV, the purchaser can check the clarity and resolution, whereas the sensitivity can only be tested by professional using special testing equipment or by comparison of a few units in the dark.

Due to low sensitivity, single-stage Gen. I tubes are very demanding with regard to light transmission of the optics. Only scopes with special light gathering optics (magnification power not more than 1,5) may provide satisfactory results when viewing at a light conditions equal to the light of the moon. When light is lower, an I.R. illuminator is needed. Unlike many other products in this class, all «Dedal» products with Gen. I tubes are equipped with electronic overload flash protection system to prevent damage in case of temporary exposure to bright light.

Generation I+ (Super I+)

This is the next modification of the Gen. I NV tube with a fiber optics plate being installed at the front or at the back of a tube. This modification allows for an improvement of the image resolution and prevents distortion from other light sources in a field of view. Tubes of Gen. I+ have light amplification of approx. 1 000 times, while the photocathode sensitivity increases to min. 280 mA/lm. Resolution in the center is 45–50 lp/mm.

NV units built with the Gen I+ tubes differ from the Gen. I units by increased image quality, lower distortions and better viewing distance in passive or active mode (with an IR illuminator). These scopes work well in an urban environment. In the open space, the units are effective with the ambient light levels down to ¼ of a moon. When light conditions are lower, an IR illuminator is needed. The cost of the Gen. I+ tubes is in 4–9 times higher than the cost of the regular Gen. I. Our company manufactures units «Dedal- 220» and sight scope «Dedal- 210» using the Gen. I+ tubes.

Note. The Buyer should take into consideration that some producers use the designation Gen. I+ for their devices Gen I. It often misleads buyers because in fact tubes Gen. I have a resolution not higher than 38–40 pl/mm. We use the designation Super Gen I+ in our English advertising to make clear for the buyers peculiarities of the tubes Gen I+ with high resolution.

The construction of the Gen. II tubes differs from the Gen. I+ by using a special electron amplifier — the micro channel plate (MCP).

The performance characteristics of such NV tubes are: a higher photo cathode sensitivity of 240 mA/lm, with the resolution of 32–38 lp/mm. The lifetime of these tubes is designed to be not less than 1 000–3 000 hours of operation. Two types of NV tubes with micro channel plates (MCP) are currently available: the 25mm and 18mm ones. From the users prospective the larger diameter is more efficient but also requires larger NV unit. In this category, «Dedal» manufactures a multifunctional NV Scope — the «Dedal- 45» and series of rifle scopes «D- 300». All of the above mentioned units are equipped with an additional manual brightness control that allows the viewer to adjust the scope for the optimal gain/noise ratio.

With a light gain of 25 000–35 000 the Gen II+ tubes have photo cathode sensitivity of 240–600 mA/lm and are sensitive to light in the infrared spectrum. Resolution is 39–45 lp/mm. Work capasity of the tube is estimated to be 1 000–3 000 hours. Since the Gen. II+ tubes are smaller (they do not have a speed up chamber) they have a slightly lower light amplification than the Gen. II. Yet due to the especially high sensitivity in the IR spectrum the Gen. II+ units have better viewing distance in the open space. If the main task for the unit is photo or video recording, the Gen II NV unit should be chosen due to its higher light gain. NV units with the Gen. II+ tubes are equipped with automatic gain control, flash protection, protection from the side light distortions and feature a high quality image throughout the entire field of view. Units equipped with Gen. II+ tubes are used by the armed forces of many countries and considered to be of professional quality by the experts.

Gen. III differs from the Gen. II+ in use of a photo cathode based on Gallium Arsenate with even deeper sensitivity in the IR spectrum. The photo cathode sensitivity is 900–1600 mA/lm, resolution is 32–64 lp/mm and capacity for work is 10,000 hours. This is 3 times longer than with the Gen. II tube. The NV units using the Gen. III tubes work very well in the low light environment. The image comes out clean and with excellent contrast. The only drawback of Gen. III units is their vulnerability to the side light distortions due to lack of the fiber optical plate on the front of the tube. Until recently Gen. II+ and III units where used mostly by the military, these units became more widely available not long ago.